This Bridge Can Get Us There

Publishing Practices is funded by the Capital Cultural Fund (HKF)

The first edition of the program Publishing Practices is called This Bridge Can Get Us There and unfolds around a set of events that will gather artists, writers, scholars, performers, and practitioners from the African continent and its diaspora to contribute, discuss, and co-create longstanding formats. It reflects on the potential of publishing as a subversive and emancipatory practice through the prism of transnational feminist methodologies and anticolonial thought.

Drawing from and extending feminist postcolonial criticism, transnational feminism looks at how women from multiple locations and with different theoretical and practical background decenter – in the words of M. Jacqui Alexander and Chandra T. Mohanty (1997) – both national and neocolonial power structures. In another collaborative writing (2010), the two feminist scholars also remind us that the transnational, when used with its critical edge in feminist research, consents a space for understanding women’s lives through an intersectional perspective, with a focus on both similarities and differences in terms of race, gender, class. It encourages the gathering of differentiated female experiences across the globe, without erasing their specificity, or following Brazilian feminist artist Denise Ferreira da Silva’s brilliant suggestion, without separating them (da Silva, 2006). It is rather a bridging. The project is, indeed, named after a statement written by African-American author Toni Cade Bambara in one of the essays of the radical anthology This Bridge Called My Back, Writing by Radical Women of Color (1981), which recites: “This Bridge can get us there. Can coax us into the habit of listening to each other and learning each other’s ways of seeing and being.” The bridge, addressed in the anthology, figures here as the spatiality of the book able to activate sites of encounters, in a double movement of local and global agency, forgetfulness and remembering, and inspires us to approach writing and publishing as emancipatory tools to undertake. Not only writing but also more improvisational creative works which involve spoken word poetry or dramatical performances; not only books, but scores, scripts, and radio plays. 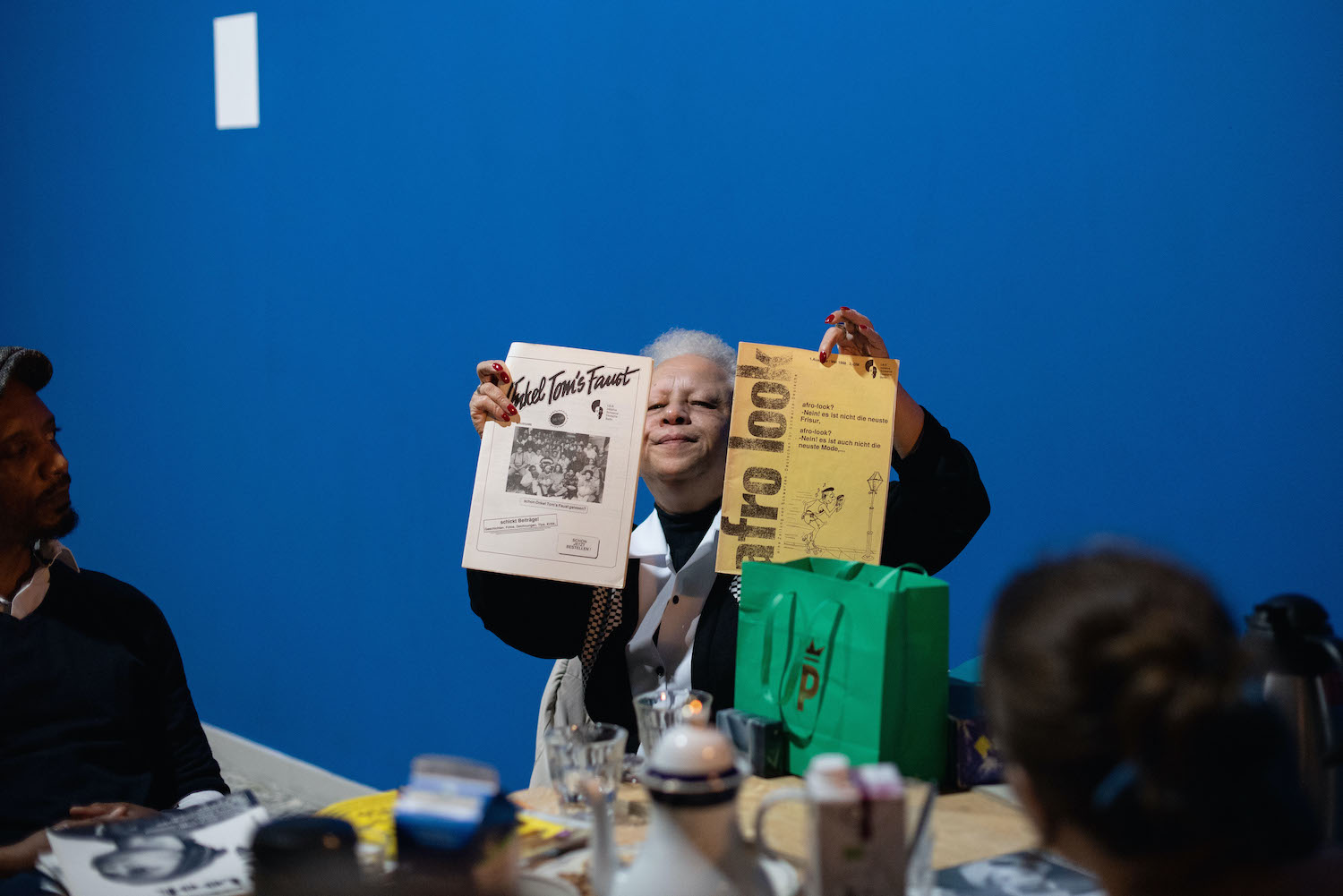 Contributor Ricky Reiser in Unpacking Our library activation #2 shows examples of Afro-German and Afro-Diasporic Publications. As an author, editor and artist she continued producing the magazine Afro-Look for over a decade (1989-1999).

As regards the second source, anticolonial thought, the project will primarily delve into what is generally considered as the under-acknowledged predecessor to postcolonial theory, anticolonialism that, however, shares with it the necessity to interrogate binaries of “modernity” and “tradition,” the “West” and “non-West,” and emphasizes the uneven ways in which power and resistances have unfolded globally (Alexander and Mohanty, 1997). This Bridge can get us there will particularly turn to pan-Africanist forms of anticolonial critique by women, a chapter usually neglected in the study of pan-Africanism. If Afrodiasporic (African-American, Caribbean, Afro-British and South-Indian) literatures, practices, and philosophies inform transnational feminism, Africa holds a central place in pan-Africanist anticolonial thought and struggle. As Ghanaian writer, academic and politician Ama Ata Aidoo argues (1998), feminist pan-Africanism emanates from the awareness that African women should have access to political life and continue to tackle the many obstacles that colonialism and the West imposed in a more vicious way upon them: “It is not possible to advocate the independence for the African continent without also believing that African women must have the best that the environment can offer. For some of us, this is the crucial element in our feminism.” However, she also expresses a vision of feminism for Africa that is at once pan-African and nationalist, epitomized by Anowa (from her seminal play Anowa, 1970) and her dream: “I dreamt that I was a big, big woman. And from my insides were huge holes out of which poured men, women and children.” Anowa’s porosity both symbolizes the dismembering caused by colonialism and the promise of re-membering all those “poured men, women and children.” 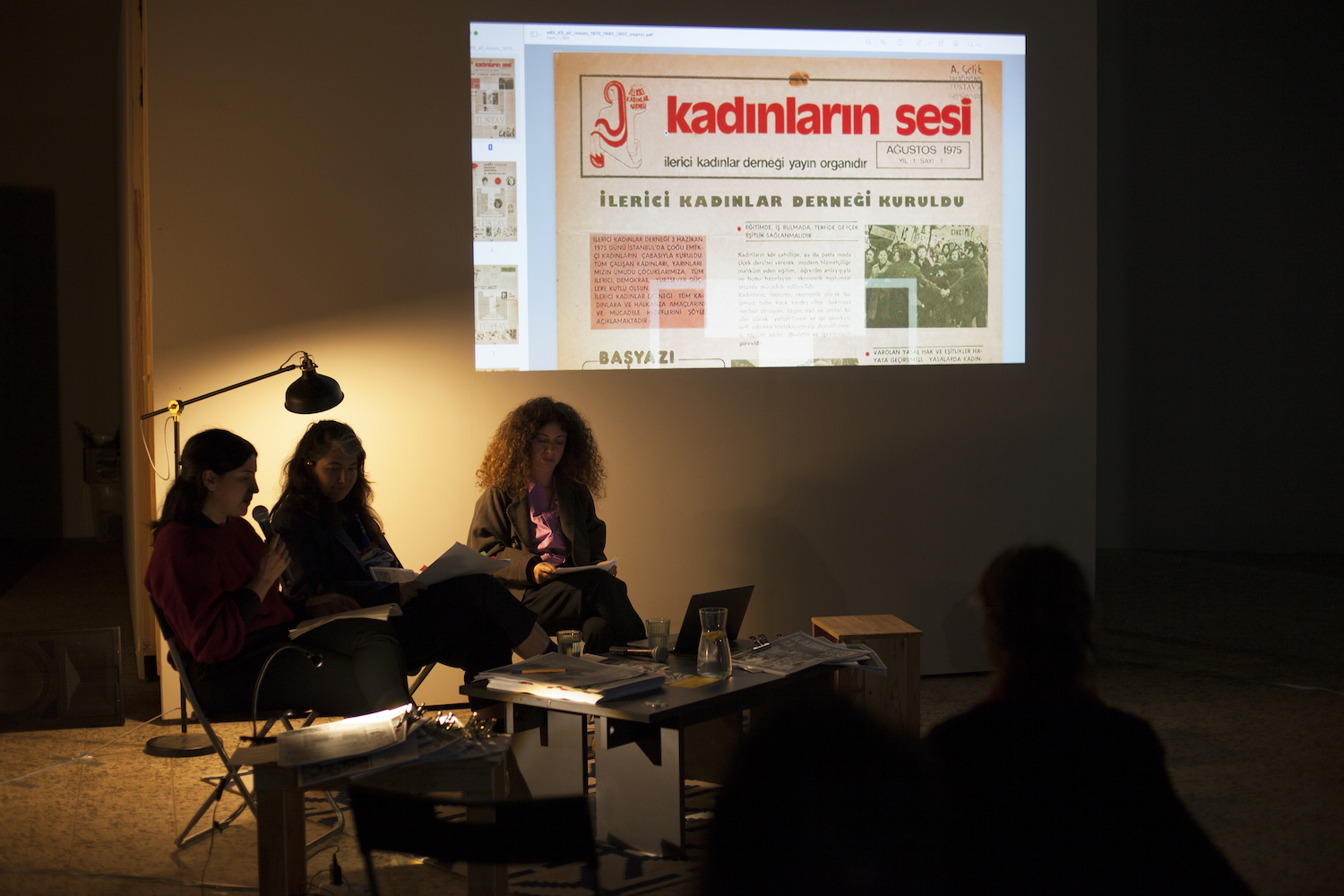 the feminist newspaper Kadinlarin Sesi (Women’s Voice) was the center of the event Unpacking Our library activation #1 with Pınar Öğrenci, artist and filmmaker, and Övül Ö. Durmuşoğlu, curator, writer, and educator.

It is this re-membering that the project tries to foster through a transnational, feminist and anticolonial publishing process, where the book will become a repository of all the pieces scattered by colonialism. In that regard, we can invoke “rememory” by Nobel-prize novelist Toni Morrison (2020) as a restorative writing practice: “Rememory as in recollecting and remembering as in reassembling the members of the body, the family, the population of the past”; a quote echoing another revolutionary book – Pedagogies of Crossings (2015) by Jacqui M. Alexander, written as an homage to This Bridge Called My Back – and one of its foundational questions: “What tools, what methodologies, if you will, do we need to develop to coax memory back into work, to mute the seduction of forgetting and make re-memory irresistible?… How do we develop these multiple pathways of sight and seeing?”

The plurality of locations, practices, and theories to be re-membered will be also reflected in the fact that This Bridge can get us there sets out to traverse publishing in its broader sense, considering different modalities of speech, translation, transmission, dissemination, and archiving with a special emphasis on perspectives from the African continent and its diasporic voices. In addition, taking its cues from historical publishing experimentations, and examining more contemporary manifestations of it, the project seeks to address this expanded sense of publishing practice by looking at varied emancipatory experiences while simultaneously exposing and reflecting on the invisible structuring mechanisms that lie behind the act of publishing, and the hegemonic systems of knowledge production informed by logocentric and Eurocentric views and languages. As a result, several languages, not necessarily European colonial ones (English, French, Spanish, Italian, Portuguese), will be deployed such as Arabic, Wolof, Swahili, Lingala, among others.

If the etymology of the word “publishing” originates from the Latin publicare, meaning “make publicly known, reveal, divulge, announce,” in the late 14th century the verb also meant “to people, populate; to multiply, breed,” for example “ben published of” meant “be descended from.” Returning to the historical use of the word allows us to connect with the dimension of transmission and descendancy that this project finds its roots and inspiration in. This is the plural female transmission, for example, that Toni Morrison tried to secure and promote when she played a pivotal role as editor of feminist iconic personae such us Angela Davis, bell hooks, Alice Walker, before becoming a world-renowned writer.

This is the po-ethical endeavour that Nigerian-British writer Amina Mama invites us to take on, when she announces (2018): “women all over Africa organize themselves to pursue their social, cultural, political and economic interests. The now substantial body of feminist-inspired historiography on women’s struggles during the colonial period indicates unequivocally that they have often mobilized and resisted as women, in order to pursue interests they had defined for themselves, and that they began to do so long before modern feminism came into being. Historians continue to unearth examples of women’s scholarly and philanthropic work as well, thus extending the conceptual boundaries of modern feminist thought.”

Finally, publishing will be seen as a self-reflexive practice to be measured against recent critiques of the verbality of dominant knowledge systems that marginalize other embodied knowledges and oral histories. To the same extent, digitization demands a rethinking of the print medium, which must embrace various modes of circulation and face ecological questions. In view of this, the project will retain the book as a bridging site in a more metaphorical than literal or literary acceptation, and a close attention will be paid to how words can be cited, recited, translated, performed, embodied, and suspended or silenced at the same time and yet invested and devoted to the practice of “speaking in tongues,” and unveiling that “voice that lies buried under you” (Gloria Anzaldua, 1981). How Trinidadian-Canadian poet M. Nourbese Philip once sang (1989): “The limits of our language are the limits of our world,” and the limits of our world should not undermine the right to speak differently, nor the right to dwell in a more environmental way.

This format rehearse collective modes of libraries activations. Each session puts into play shared structures of archiving and reading, from digital collections, re-publications to translations and on-going investigations.

With Övül Ö. Durmusoğlu and Pınar Öğrenci. At Archive Library

With Michael Götting and Ricky Reiser. With EOTO library

With Özlem Kaya and Onur Çimen. At Archive Library

AWU is a documentation center and a radio that aims at creating a sound archive of womxn voices and the political and social struggles that run through them. With Imann Gaye, Aby Gaye and Marie-Yemta Moussanang, Kpénahi Traoré, Edwige-Renée Dro amongst the others.

In the framework of The Laboratory program hosted by New Art Exchange in Morocco, Publishing Practices will organise a collective reading session in an attempt to think through the ways in which a library can become a medium for connecting readers’ trajectories, struggles and potential alliances.

Forum of co-learning, at Archive in Berlin, Germany, November 14–December 5, 2021

The forum will convene residents for a four-weeks-long reunion and intensive program.

One open session on the discussed contents will take every Saturday.

The exhibition will explore both artistic and publishing practices that are concerned with the spatiality of the book as a medium and the mobility embedded in it. The Study Days are conceived as a two days long public program of gatherings, talks and performances.

If you no longer wish to receive our newsletter, please send an e-mail to the following address: info@archivejournal.org

We use cookies on our website to give you the most relevant experience by remembering your preferences and repeat visits. By clicking “Accept All”, you consent to the use of ALL the cookies. However, you may visit "Cookie Settings" to provide a controlled consent.
Cookie SettingsAccept All
Manage consent

This website uses cookies to improve your experience while you navigate through the website. Out of these, the cookies that are categorized as necessary are stored on your browser as they are essential for the working of basic functionalities of the website. We also use third-party cookies that help us analyze and understand how you use this website. These cookies will be stored in your browser only with your consent. You also have the option to opt-out of these cookies. But opting out of some of these cookies may affect your browsing experience.
Necessary Always Enabled
Necessary cookies are absolutely essential for the website to function properly. This category only includes cookies that ensures basic functionalities and security features of the website. These cookies do not store any personal information.
Non-necessary
Any cookies that may not be particularly necessary for the website to function and is used specifically to collect user personal data via analytics, ads, other embedded contents are termed as non-necessary cookies. It is mandatory to procure user consent prior to running these cookies on your website.
SAVE & ACCEPT